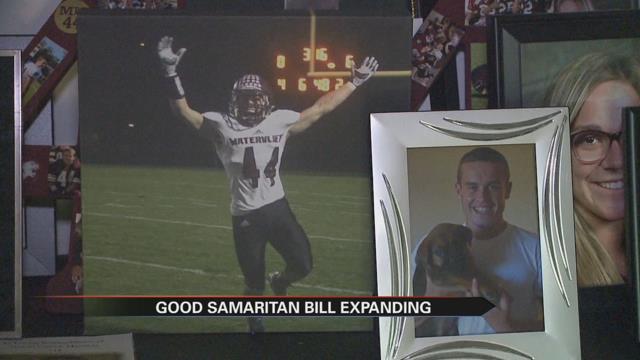 In Berrien County, more people die from an opioid overdoses than in car accidents.

Two Michigan State Representatives are fighting to stop those deaths.

One way they’re doing it is by working to expand the state’s Good Samaritan Law.

Watervliet resident Lori Mizwicki’s son made a mistake on New Year’s Day, which cost him his life.

Now she’s working alongside more state politicians to make sure other parents don’t have to deal with that same tragedy.

“Mason was 16, a month away from his 17th birthday,” said Mizwicki.

Mizwicki is recalling her darkest day, just before the start of 2014 when her son, Mason, was offered prescription drugs at a New Year’s Eve party.

“The kids there that night at the party were afraid to call 911 for fear of getting in trouble,” said Mizwicki.

It’s that very fear that prevented mason from getting the help he needed that night to survive.

“The loss of a child is forever,” said Mizwicki.

Nearly a year later, in December 2015, Michigan Governor Rick Snyder signed the Good Samaritan Law, exempting anyone under the age of 21 from facing charges connected to a prescription drug overdose.

“We’re dealing with a heroin epidemic here in the state as well as the country and for us to be able to grapple with it we need to introduce laws like this that have been effective in other states so that we can protect people and make sure they get the medical help they need in that emergency circumstance,” said Singh.

Singh and Rep. Al Pscholka have been working to expand the Good Samaritan Law to include any age, any drug.

They both call it common sense legislation.

“We work very closely with the police community, with the courts, with the medical community and they said they’ve seen these types of laws in other states to be effective,” said Singh.

And it’s for that reason, Mizwicki is fighting everyday to make sure no one else fears calling for help.

“We are not condoning the use of prescription or heroin or any type of drug, what we’re saying is a life can be saved, they don’t have to go through what my family has gone through,” said Mizwicki.

Pscholka says he’s hopeful Governor Snyder will sign both his and Singh’s law by the end of the month.