Good Samaritan Bill to be signed into law 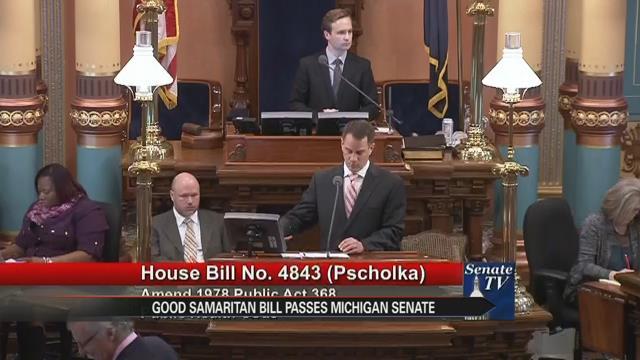 A bill sitting on the governor’s desk would protect teens from being prosecuted if they dial 911 to report a drug overdose in the state of Michigan.

Local representative Al Pscholka called ABC57's Alexandra Koehn from the floor of the House after the Senate passed the bill on Wednesday.

The Good Samaritan Bill would protect people under the age of 21 who call for help if someone is suffering from a prescription drug overdose.

Pscholka introduced the bill after a Watervliet 16-year-old was found dead from an overdose after a New Years Eve house party.

Pscholka said, “It was really unfortunate, Mason made a mistake. And it happens with young people, and he was at something called a 'skittles party' where prescription drugs were thrown into a hat and kids pick them out in order to get high and unfortunately lost his life.”

Mason Mizwicki was just 16-years-old when he died from a methadone overdose. He was found in a truck deceased the next morning.

Pscholka said no one called 911 because no one wanted to get in trouble.

Pscholka said, “This is a very difficult story. Really a local tragedy and I have a young guy that should still be playing football and hanging out with his buddies.”

Pscholka said they are looking to extend the legislation to include illegal drugs and possibly all ages in 2016.

Pscholka said, “In Berrien County 64 people died of drug overdoses. More than half of those were from prescription drugs. That compares to 11 deaths for alcohol related car crashes.”

ABC57's Alexandra Koehn dropped by the skate park in Niles where a lot of teens hang out. None of them had heard about the bill, but they all thought it was a good idea.

Thomas Dunlap said, "A lot of kids think they’re going to get in trouble so they just don’t call and end up costing their friend a life.”

Dunlap and Bradlee Barker feel that protecting callers from getting in trouble with the law, they think more teens will call police for help in those situations.

Mizwicki’s mom and aunt also took to the house and senate floor to advocate for this bill.

Pscholka believes the governor will sign it into law before Christmas.