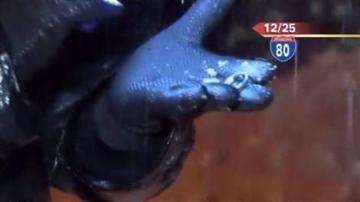 KINGVALE, Calif. -- It's a Christmas story waiting for a happy ending.

A California man driving in the snow stopped to clamp chains on his tires. While doing so he lost his wedding ring.

A snow chain installer happened to be passing by when he saw the man frantically sifting through the snow. The chain installer decided to stop and help the man but without success. They both eventually stopped looking and drove off.

But the Good Samaritan returned late into the night and had a bit more luck.

"I decided to go look for the ring because I knew approximately where it was. I was hunting with my head lamp and hand light. It took me less than an hour, and I found it next to a semi truck. It was slightly submerged in the snow," said Douglas Benedetti, snow chain installer.

Now the only problem is there's no way to return it. The two men didn't exchange names or phone numbers but the helper said he's going to keep trying to track down the man he helped.