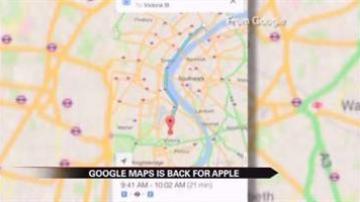 Google Maps is back on Apple products.

The technology giant known for its accurate searching and mapping technology re-released its maps app for iOS 6.

The release also comes with new features. There is turn-by-turn navigation and transit directions.

Apple came under fire a few months back after trying to release its own maps app.

The app had a lot of problems including giving users the wrong directions.