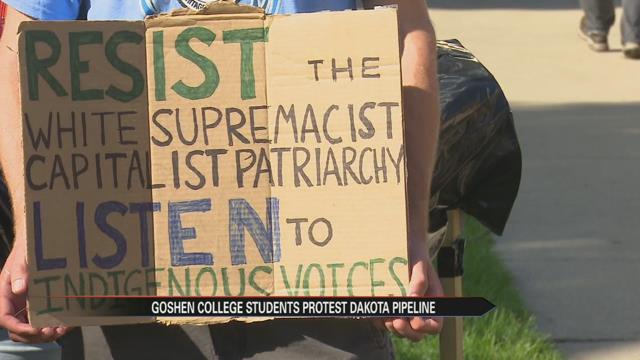 The Dakota Access pipeline is causing controversy across the country, and one group of Goshen College students came out to protest it today.

“We are here basically to stand in solidarity with the Dakota nation against the Dakota Access pipeline,” said one student Mimi Salvador.

Mimi Salvador is a descendent of the Kichwa tribe.

“We want to raise awareness among our community about the human rights and ecological abuses that are going on in North Dakota,” said another student Cecilia Lappstoltzfus.

Energy Transfer Partners, the parent company building the pipeline, says it’s a way for the U.S. to gain energy independence, but Goshen College students think the government is moving down the wrong path.

“I think it’s a step in the wrong direction of increasing our reliance on fossil fuels rather than investing in other options for energy provision,” said student Isaiah Friesen.

Plus, they say pipelines can spill.

“It could happen here. In fact, it did. In 2010, a pipeline spilled in the Kalamazoo River in Michigan. That’s close, and whenever a pipeline spills, it’s releasing oil downstream, and it can affect millions of people,” said Lappstoltzfus.

And Goshen College students think this new pipeline is unjust.

“Building this pipeline next to the Lakota Sioux reservation is the latest in a string of strategies that are disregarding indigenous people of the U.S.,” said Lappstoltzfus.

“It’s really unfair, because you see these pipelines are only built through indigenous lands,” said Salvador.

The Standing Rock Sioux tribe has filed a lawsuit against the U.S. government, saying they weren’t properly consulted about the project before Dakota Access broke ground.

“Right now in North Dakota, there’s 7,000 natives and non-natives forming a human barricade against this pipeline, so we’re here to make sure they know they’re supported,” said Salvador.

“It’s standing in solidarity with people who have been forgotten and marginalized in our society ,” said Friesen.

“Every time is the right time to speak up against that,” said Lappstoltzfus.

Energy Transfer Partners claims the pipeline will bring up to 12,000 construction jobs and $156 million dollars in sales and income taxes.

If pipeline construction continues, it should be operational by the end of this year.