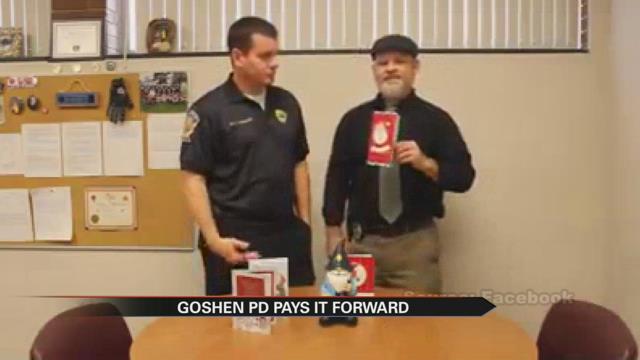 With Christmas less than a week away, some local police officers are getting into the spirit of giving. Officers at the Goshen Police Department came up with a very creative idea and they’re calling on the community to pay it forward.

Every year, officers are granted permission to grow beards. In exchange, they have to donate $50 over a five-month period to keep the beards.

They raised a total of $1600 and wanted to put the money towards a new idea.

The department posted a video on Facebook to introduce their “#FollowtheMoney” challenge.

Four of the department's Facebook friends were nominated by the officers to pay it forward to someone else in the community.

They created four holiday cards to give to the nominees, each filled with $100 to do a good deed.

‘We thought it would be cool if we had each shift represented by a card so we have an afternoon shift, night shift, detective bureau and then day shift so we sent those cards out by tagging four people, who will hopefully tag someone else and pay it forward,” said Goshen Police Division Chief Shawn Turner.

The nominees have to do an act of kindness for someone, using at least $1 of the money inside the card and sign their name on the card. They're asked to post their good deed on the department's Facebook page.

Next, they have to tag a friend on the Goshen Police Department page and challenge them to do a good deed and give them the card.

They want to get the cards passed around to several people in the community.

“We try every year to give back to the community,” Turner said.

Once all of the money is spent in each card, they must be brought back to the police department.