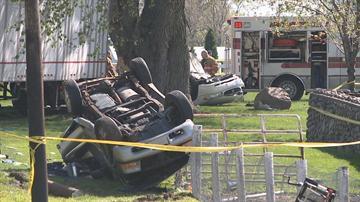 ELKHART COUNTY, Ind. – A woman is dead after a semi smashed into two cars on State Road 13 just south of the intersection with County Road 24 on Monday afternoon.

According to the Elkhart County Sheriff’s Department, Edna Mast, 68, of Goshen was killed when a semi collided with her car and another vehicle around 2:30 p.m. as she was driving south on State Road 13.

Witnesses said Mast had slowed to avoid a bicyclist, an SUV driving behind her also slowed.  But, the semi traveling behind them didn’t and wasn’t able to avoid the cars.  The SUV was thrown off the road and flipped over; Mast’s car was also thrown off the road and into a rock and tree.  Mast was pronounced dead on the scene; the driver of the SUV was treated for minor injuries but didn’t require hospitalization.  The driver of the semi wasn’t hurt.

According to nearby residents, it wasn’t the first fatal accident on that stretch of State Road 13.

“We had a fatality in our front yard in ’03, from a semi driver,” described Sandi Hoover, who lives nearby.  “It’s speed and the cops need to patrol this road more, you never see very many cops going up and down this road and the semis are running like crazy.”

Other residents agreed that the road is becoming more and more deadly and hoped something could be done about speeding.

“There’s way too much speeding going on here, we see people drag racing down the road,” explained Kim Gregory, who lives across the street from the accident scene.  “There’s a lot of children out here, we have children, almost everybody in our neighborhood has children and there’s Amish children everywhere.”

Neither of the other drivers involved in the accident were ticketed or arrested as a result of the crash.