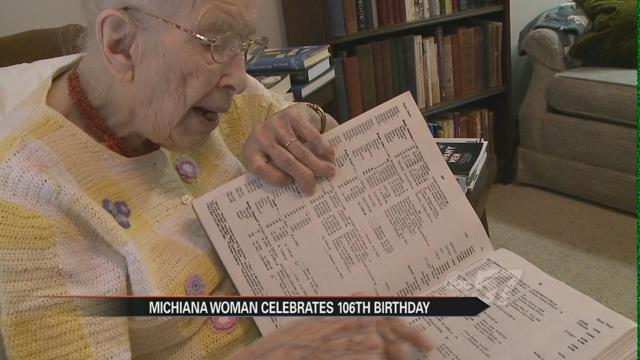 A Goshen woman is turning 106-years-old Thursday. Rachel Kreider is the oldest resident at Greencroft Manor.

Throughout the years she has lived in different states, gone to college, had three children, and traveled a lot with her late husband Leonard.

"We enjoyed travel. I believe we have been in all 50 states but we traveled more like students. We traveled inexpensively," Kreider said.

Kreider graduated from Goshen College and then earned her master's degree at Ohio State.

She has outlived most of her contemporaries and other family members too.

She misses family members who have passed on, including her her daughter who died at the age of 39.

"After a long marriage and a lot of experiences together, it is really quite a wrenching experience to lose one's spouse," she said of late husband Leonard.

However, she does have a 94-year-old sister in Tulsa, Oklahoma.

Her 76-year-old son Emil lives in Harrisonburg, VA. She has grandchildren and great-grandchildren throughout the country.

In her long life, she has seen a lot of things change, especially with the evolution of technology.

“People wonder how I can live without a computer. I don't have a computer. My nephew stood in front of my typewriter and laughed aloud," she said.

From time to time, she still types letters on her Olympia Typewriter that sits on her desk.

She finds it interesting how much things have changed.

“I wish I could find the words that describe what it's like when you just look on and watch things happening so fast and furiously.”

She attributes her key to longevity as her father's influence.

“My father used to stress regulation and moderation. I don't know if that has crept into my life. I didn't think I was particularly moderate but maybe there's something to that,” she said.

This 106 year old is not slowing down either, she has been reading to a blind man for 12 years.

“Every Tuesday he comes by. I know what columns he likes to have read. The obituaries, older people always read the obituaries,” she said.

The man's son published a book of the notes and memoirs she wrote during her time of reading to him. Reading is one of her favorite things.

“I can still read and that is such a satisfaction.”