Got chickens? South Bend residents figure out next step after laying eggs 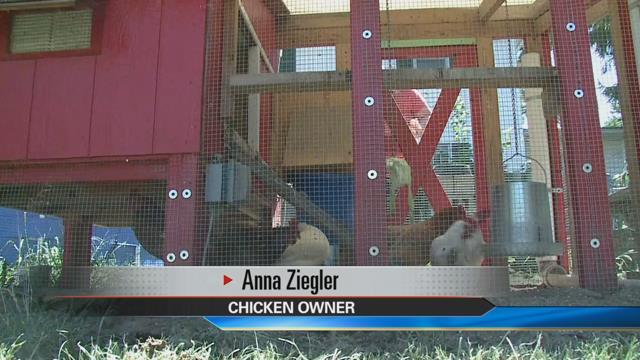 Over 40 South Bend residents have permits to have chicken coops within city limits.

Matt Harmon, shelter manager of South Bend Animal Care and Control, says that this is part of a movement for urban sustainability and agriculture.  He says  it gives people a chance to raise their own eggs and connect them with their food.

But what happens when the chickens are past their egg laying prime?

The South Bend Ordinance states that it is forbidden for the chickens to be butchered within the city.

Some residents are upset with this ruling. They don't want to have to keep taking care of the chickens if they are not producing eggs, and believe that turning the chicken into meat, is a good alternative.

Anna Ziegler is a two-year chicken owner.  She also says that this is a good alternative, but believes that it shouldn't be done within the city.

Ziegler believes that this could open the door to animal abusers and create a health concern in the neighborhood, especially with the blood draining that comes with butchering chickens.

Harmon says that chicken owners can either take them outside of the city to be butchered, or give them to a friend or sanctuary that will take them.  Ziegler plans on retiring her chickens at her parents house.

South Bend Animal Care and Control will also take chickens into their care.