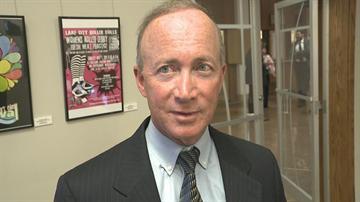 On Wednesday night the South Bend School Corporation Board of Trustees voted to approve a budget reduction plan that will make $15-million worth of cuts for the corporation to make up for the budget deficit.

Teachers will be fired, programs will be eliminated and schools will be shut-down.  There was heated disagreement about what to cut at the board meeting, but most in attendance agreed with Board President Roger Parent’s claim that the person most responsible for the deficit was Republican Governor Mitch Daniels.  South Bend Superintendent Dr. Carole Schmidt also stated that state policies, most notably the private school voucher program which has cost the corporation over 600 students, were the problem.

“We lost over $2-million because of vouchers,” Schmidt explained at the meeting.  “We’re getting $89-thousand back, you can do the math.”

Daniels was in South Bend on Thursday night, so ABC57 decided to ask what he thought of being blamed for the South Bend School Corporation’s financial problems.

The governor also said he thought the school administration should take a look at other states before speaking about problems they may be having with Indiana.

“They wouldn’t want to trade places with people in other states where huge cuts have happened,” Daniels claimed.  “We’ve been increasing spending every year but one.”

Ultimately Daniels said the school administration may be to blame for the deficits and not his policies.

“When they stop spending 40-cents of their school dollars outside the classroom on administrative costs and support, when they begin to show some attention to real efficiency then I think they’ll have a stronger complaint,” Daniels explained, saying blaming him was a poor excuse.  “It’s just passing the buck when you’ve done a poor job yourself.”

South Bend school officials could not be contacted on Thursday night for comment on the governor’s statements.