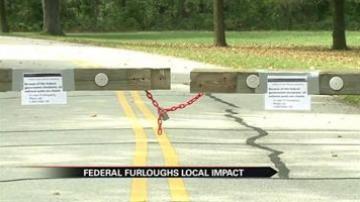 It is extremely quiet at the Indiana Dunes National Lakeshore. It is closed because of the government shutdown. Even though the park is shut down, Indiana Dunes Law Enforcement Specialist Ken Mehne is still on duty.

Mehne may be on duty, but he's not getting paid.

There's no pay for him or any of his officers because of the shutdown.

"It's frustrating. Especially since the park is closed to the public but we're making the best of it that we can. And we'll deal with it until we're told differently," said Mehne.

Non-essential federal workers have been sent home without pay.

But others, like Mehne are considered essential and so they remain at work.

They don't know how long they'll be working without pay.

"Well I'm sure most people are hoping that its very short. But we haven't been given any indication on how long it can go on and that's obviously not up to us so we'll have to do the best that we can with the situation that we have," said Mehne.

Mehne, a grandfather of three, says fortunately he is able to go without a paycheck for a while. Not all of his colleagues have the same luxury.

Mehne says the shutdown even extends to work-related communications. He has been told that he's not to answer his work phone or emails.

If you need to reach the park during the shutdown, the 24-hour emergency line will have to do.