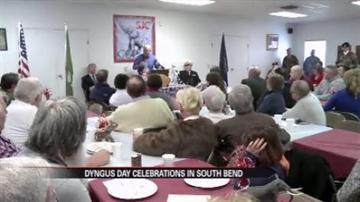 SOUTH BEND, Ind. -- South Bend claims to be the birthplace of Dyngus Day. For a long time it was just used for democratic candidates to meet potential voters. But now members of parties on both sides of the aisle are celebrating.

"I was born and raised on the west side of South Bend. I remember Dyngus Day as far back as I can remember. It was the only day a year that my parents would pick me up from school because they didn't want us walking around with everybody partying at the Democratic Club,” said Lagodney.

For 83 years people have gathered on the Monday after Easter to celebrate Dyngus Day.

It hasn't stayed that way. For the second year in a row, Indiana Governor Mike Pence was in town.

"I'm embarrassed to say I've been in town for 15 minutes and I haven't had a polish sausage yet,” said Pence.

'It's great to know that the republicans have to do the same thing that we are doing in order to keep afloat and keep in office,” said Hudak.

But was that really their aim?

With no elections this year, why bother coming to South Bend?

"I see Dyngus Day as one of those great moments where we are not just celebrating Polish cultural heritage but we are really celebrating family. We are celebrating the rich traditions of a community,” said Pence.

“We certainly enjoy the polish food and the polish heritage but this is a holiday for the whole community,” said South Bend Mayor Pete Buttigieg.

Dyngus Day events will continue into the night.

Several locations will have drink specials and entertainment, but the one message everyone is preaching is responsibility. Name a designated driver or take a cab.