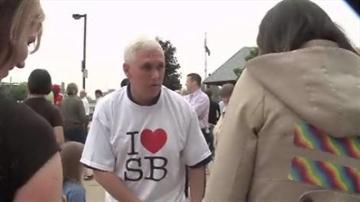 Some Indiana Republicans are pushing for a vote on a same-sex marriage ban next year, including Governor Pence.

The group wanted to let the governor know they didn’t agree.

Willow Weatherall took her daughters to meet Governor Pence and share her views on gay marriage.

"I also want Indiana to be a place when they grow up they have the right to marry anyone that they love,” said Weatherall.

Currently, that’s not possible for same-sex couples like Deb Davis and her partner Cynthia Pierce.

By their 25th anniversary, the couple wants to tie the knot,

Next year, Indiana voters could decide whether to solidify the state statute that marriage should be between a man and a woman only with a vote on a state constitutional amendment.

"I just wish the governor would just drop it,” said Davis.

Davis doesn't understand the governor's push for a gay marriage ban and is already planning her wedding elsewhere.

"We've been talking about Massachusetts but were hoping that Illinois passes it before then,” said Davis.

"I think it's altogether fitting together as we gather here on the eve of Independence Day to remember what freedom is all about. And that is to be able to speak in open ways and open opinions,” said Pence.

The governor's opinion on gay marriage is clear. It's not an option.

Many who attended said that is not freedom.

"I think there is a lot of us in this town that feel that that is not the message we want to send to people and Indiana,” said George Garner.