Graffiti on South Bend cleaned up by city efforts 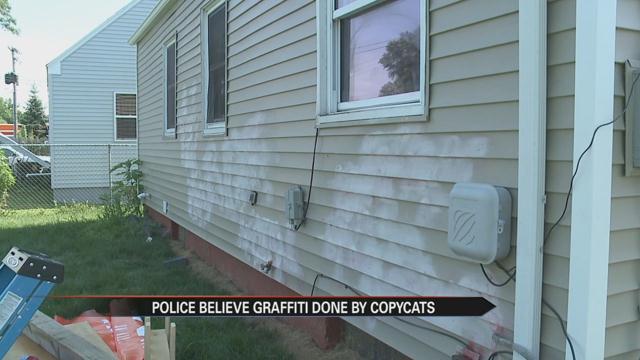 A South Bend home tagged with troubling language and gang signs, has officially been cleaned up. Police did confirm some of those symbols to be gang related but don’t believe the message was written for gang related purposes.

“Defacing someone’s property whether it is gang related or not gang related it is an eye sore to this community,” says Officer Kyle Dombrowski, of South Bend Police.

Officer Dombrowski is sick of seeing eyesores pop-up around his city.

Monday foul language and offensive signs turned into a safety issue as neighbors wondered if gangs were sending a message.

“Some of these images do depict to be gang related,” says Dombrowski.

Dombrowski adds that because of how the graffiti was ordered on the house it seems more like random symbols versus a gang message and neighbors should feel safe.

Just 24 hours ago the house on Sheridan Street was covered in red paint, swear words, and gang signs but after the city’s Graffiti Abatement Program cleaned up the mess; now the only signs of graffiti are on paint soaked rags.

The graffiti abatement group aims to cover up visual disasters, but officers say they’re taking it a step further.

“Instead of just covering up with paint which is one thing we want to do but we also want to understand and hear the conflict,” says Lieutenant Dominic Zultanski, of South Bend Police.

Lieutenant Zultanski says receiving reports of graffiti is especially helpful in preventing messages on a house from turning into deadly crime scenes.

“I can tell you that there is quite a bit of conflict we have seen in some messaging that never amounted to much of anything and I think that has a lot to do with the community getting involved behind it,” says Zultanski.