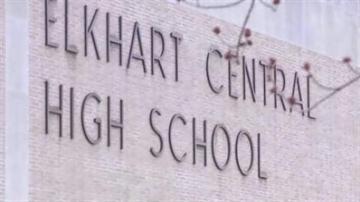 ELKHART, Ind. — School staff, parents and police are already on alert about threats made to five area schools. But on Sunday, police responded to a report of graffiti found at Elkhart Central High School.

The graffiti referred to the Sandy Hook Elementary school massacre in Newtown, Connecticut.

Parents say they are already concerned about the threat and are now wondering if two incidents maybe linked.

According to police, they received a call around 2:30 p.m. Sunday about graffiti on a wall and a sign at the school.

One of the threats said "arm the teachers" and the other referred to the Sandy Hook shooting as a hoax.

One parent said she was not taking the incident lightly.

"But we don't know if it could be something that's gonna happen tomorrow," said Angela Mazar. "It could happen next year, month, whatever. But I'd rather be safe than sorry if it's got that specified date to keep them at home."

The mother showed us the letter the superintendent's office sent out on Friday. That letter said that it was important to remember that there have not been any specific threats made yet.

An Elkhart teacher said that many of the district's schools are taking extra precaution because of the threat found at an Elkhart BMV in January.

Police have said that they will have extra security on hand.