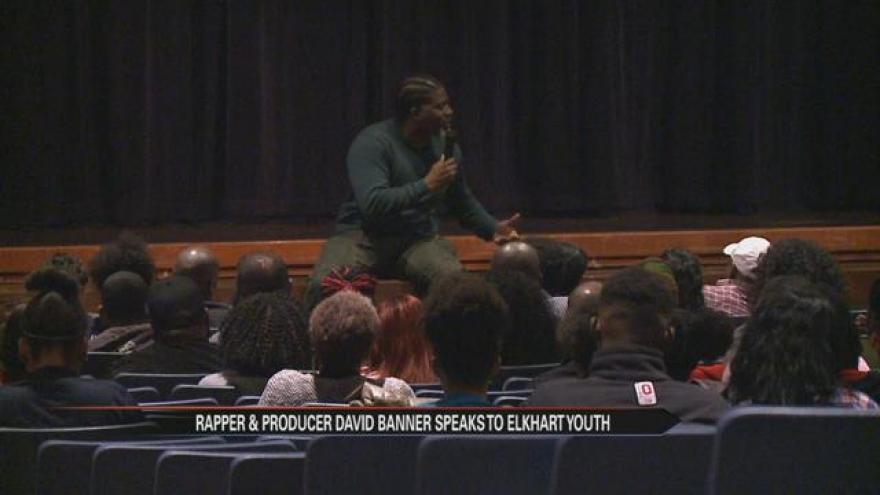 Instead of singing his hits, music producer and rap artist, David Banner, spoke about social injustice and the change that needs to happen in the Michiana community after a violent 2016 in Elkhart County.

The message was simple: “Building up our youth.”

The Grammy Award winner said it starts with the parents.

Banner knows all about the hits, but lately, the outspoken advocate for social justice has been singing a completely different tune.

Monday night, with the help of the Elkhart Chapter of the Indiana Black Expo, Banner spoke not only to youth but to parents in Michiana about the need for change in our community.

“Our children are a direct reflection of what we did or did not teach them,” said Banner.

Banner says that includes cameras, tv’s and videogames that are always in front of young faces.

In 2016 alone in Elkhart County, there were 16 different homicide incidents resulting in 20 deaths.

Robert Taylor is President of the Elkhart chapter.

“Educate our youth, that’s where it’s going to start at. We had a record number of deaths in Elkhart last year. Put the guns down. Live for the future and not just for tomorrow,” said Taylor.

Tanya Bell is CEO and President of Indiana Black Expo.

“Us understanding that it’s up to us, as well as working collaboratively to improve our communities.”

Banner, Monday, hoping that message was delivered to the 200 plus parents and youth in attendance at Elkhart Central High School.