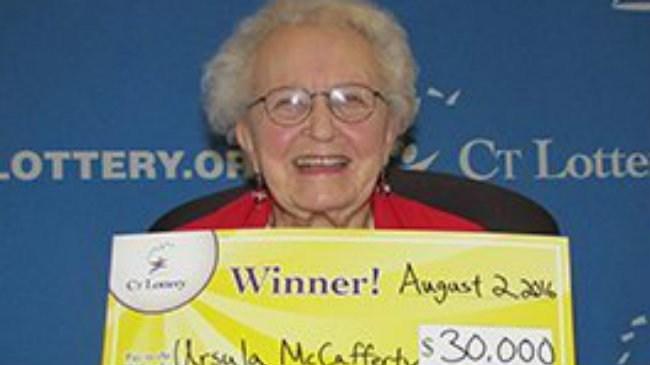 (CNN) -- For most of us, winning the lottery usually means splurging on lots of shiny new things: fancy houses, expensive cars or dazzling jewelry.

Ursula McCafferty's no different. She knows exactly what she wants to get her hands on after hitting it big: a new phone.

Preferably one "where you can actually see pictures," joked McCafferty, a 95-year-old grandmother of 12 from North Canaan, Connecticut, who won $30,000 playing a scratch game from the Connecticut Lottery last week.

But don't worry grandkids, grandma's not blowing everything on a new iPhone. McCafferty's planning to share the rest of her winnings with family because, for one thing, they are family, and, for another, they're much better than the animals in her life.

McCafferty said she enjoys playing scratch games because she likes people and her cat doesn't show her much attention.

The cat just might after seeing that shiny, new phone though.