'Grandparents as Parents' struggles to survive 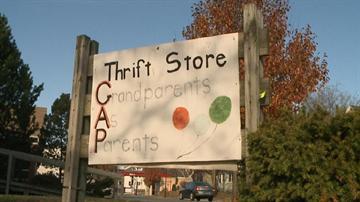 SOUTH BEND, Ind.- "I couldn't turn my back on them. I couldn't see them going to foster care."

For the last 24 years, Peg Hires has been more of a mom than a grandma.

"The stability of the family is so very important," Hires said.

She helped start 'Grandparents as Parents,' a national non-profit group, that got its start in South Bend.

That was almost 10 years ago.

And a lot has changed since then.

"When they call for their utilities, or their rents or something, we know we can't help them," Ruth Ferrell, another grandparent raising her children, said. "That hurts."

The number of grandparents raising their grandchildren has increased by nearly 15 percent in the last decade.

Despite the growing need, funds are hard to come by.

"Especially today," Hires said. "With the government in the position that they're in, I don't think anybody is going to be open to more funding with any organization."

That lack of funding could hurt.

The building they operate a thrift store out of for funding is up for sale.

Leaving members like Peg and Ruth, scrambling to find another.

If 'Grandparents as Parents' can't secure another building by April, their outreach efforts could come to a standstill.

That would impact thousands of Michiana families.

"I don't know what we're going to do," Ferrell said. "I really don't want to close the store."