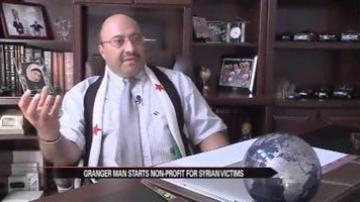 GRANGER, Ind. -- Raghid Kadi has seen so many graphic images in Syria, that it's hard for him to even cry about it anymore.

"It's past the point of where you have personal worries," said Kadi.

After losing a cousin and several friends from the Civil War taking place in his former country, he knew he had to do something.

That's why he's started a charity to help women and children whose families have been torn apart by the violence.

"Life is about what you stand for," said Kadi. "Maybe it's because I came to the United States 20 years ago that I believe in freedom. And I believe in doing good."

Syrian Orphans Sponsoring is a project he's leading in Indiana. The goal is simple; get much needed food and medical supplies to those who need it.

Many families are homeless and the fathers have been murdered.

He's hoping the President of Syria, Bashar Al-Assad, steps down.

"We want him out," said Kadi. "The reason and the way doesn't matter."

Kadi attended the same University as Al-Assad, and said he never could've imagined the actions the Syrian dictator is responsible for Wednesday.

He wants him out of power, because one more murder is just too many.

"You're seeing that every day, every moment, on every video about a country that you love," said Kadi.

Without help from fellow Americans, he's worried the conflict could get much worse.