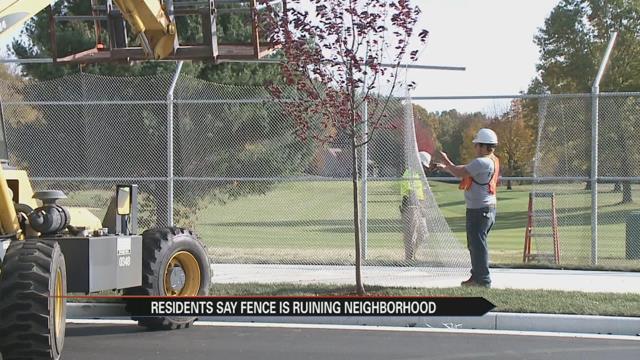 A new fence being built in Granger is getting a lot of backlash from homeowners who say it’s ruining their neighborhood.

“I have a 10-year-old and a 5-year-old and they both said that they feel like they are living in a cage,” Quail Ridge North Resident Lisa Metros said.

Metros’ home sits next to part of the Knollwood Country Club’s golf course and she has a perfect view of the new fence being built along Gumwood Road from her backyard.

“When [my kids] say they feel like they’re in a cage I don’t feel like I’ve done my job,” Metros said.

The chain-link fence spans 8-feet high with a 4-foot overhang.

It is being installed as part of an agreement made between St. Joseph County officials and Knollwood officials.

Back when Granger officials wanted to build new walkways along Gumwood Road, the town needed to purchase a piece of Knollwood’s land in order to fit the pathways.

Knollwood officials said the deal could go through as long as a fence was constructed along the walkway to protect pedestrians from errant golf balls, according to St. Joseph County Engineer Jessica Clark.

But Granger residents, specifically Quail Ridge residents, feel the fence is too much and was poorly conceived by the Texas-based executives who oversee the Knollwood Country Club – its parent company is ClubCorps.

“What I find upsetting is that corporate executives in Texas who would never place a fence that looks like this in their own Texas neighborhood think that it’s OK to put a fence like that amidst our Indiana neighborhoods,” Knollwood Member and Quail Ridge Resident Claire Roach said.

Roach echoed the thoughts of many Quail Ridge residents in saying she wants the fence, which is still being built, to be torn down and replaced with something that can protect pedestrians but also be more aesthetically pleasing.

Knollwood Country Club’s general manager, Toby Niccum, said over the phone that construction of the fence will be completed and then he will engage in a dialogue with residents, county officials and the ClubCorps executives in Texas to determine a solution for the fence that will please everyone.

“It seems like Big Texas is saying this [fence] is a middle finger to the community,” Metros said.