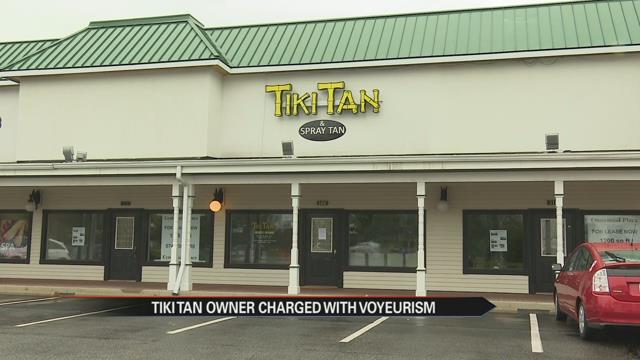 The owner of a Granger tanning salon has been charged with secretly filming a woman he was spray tanning.

Charges were filed Saturday against 51-year-old Al Reasonover, the owner of Tiki Tan in Granger.

Police allege he secretly filmed a female client while spray tanning her, and then deleted the content from his phone before handing it over to police.

The tanning salon on Cleveland Road was closed Saturday, with a short note taped to the door explaining it is independently owned and operated.

The affidavit filed by the St. Joseph County Prosecutor’s office details what allegedly happened inside the salon on the evening of April 26, 2016.

The adult female client – identified in the affidavit as “M.R.” – came in for a spray tan and police say she set up her smartphone so that it would film what was happening.

Documents say, “M.R. was a customer of the Tiki Tan and knew Reasonover both from his personal solicitation at her beauty school seeking new customers and her contact with him at the Tiki Tan location on multiple occasions.

The documents explain, “Reasonover can be heard telling M.R. to close her eyes and not open them until he says to do so. During a portion of the time her eyes are closed and her head is tilted back, while spraying the tanning gun with his right hand, Reasonover removed an iPhone from his left pocket with his left hand…Reasonover held the phone facing M.R.’s naked body with his left hand while he applied the spray with his right…before M.R. was told she could re-open her eyes, Reasonover slid the phone back into his shorts’ left pocket without any noticeable interruption to the spraying process.”

The woman took her phone to police, who then reached out to Reasonover and his employees.

Two days after the initial incident, documents say an employee texted Reasonover asking, “Whether certain events and meetings he had planned were about the ‘spray tan thing.’ Reasonover acknowledged that they were and they (he and employee) ‘needed to find out which customer did that [made an allegation about him].’”

Police say Reasonover deleted messages about the spray tan incident, along with the original video, before turning his phone over to police Thursday night.

He was charged Saturday with one count of attempted voyeurism and one count of obstruction of justice – two felonies.

Reasonover’s bond was set at $10,000 Saturday and he’s scheduled to make his first court appearance Monday.

A number of female employees who work at nearby stores spoke off-camera Saturday to say they tanned at Tiki Tan fairly often, but they never had a bad experience. A few of them added that these allegations were frightening.