Grass fires a concern with lack of rain 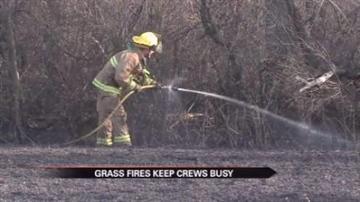 NILES, Mich. -- If you pick up twigs in your yard or a handful of leaves they will most likely crunch in your hands.

The ground is dry and it is causing big problems for firefighters. Monday, firefighters chased at least three different fires across Michiana.

Firefighters say until it rains, there will continue to be a high risk for grass and brush fires.

"It's very dangerous right now and until we get that rain it does not take much," said Niles Township Fire Chief Gary Brovold.
It's been just one week since spring officially arrived. Now that the sun is out and the snow has melted firefighters say this is the time they see the most grass and brush fires.
"Your taller grasses, all your leaves, everything gets pushed down to the ground and it's dead and it's dry," said Brovold. "As the wind is blowing through and the sun is shining on top of it, it just makes it real prime to burn."
Several fire agencies were called to mile marker 94, along the toll road, when a driver saw flames eating through the dried grass beside the highway. Firefighters say it was the strong winds that made their job that much more difficult as it reached the edge of a thick, wooded area.
"Once it starts and the wind catches it just keeps on going and it's a race to see who can win," said Brovold.
That was also true for a Milton Township fire just one hour later.
"When you are burning in an area where you have a bunch of debris left laying on the ground, you are just asking for trouble," said Brovold.
Crews had to work quickly after a trash fire spread to two boats and then into the brush.
It took close to two hours for firefighters to put out the nearly five acres that caught fire.
When there are winds that reach 15 mph, local fire departments, like Niles Township, ban burning all together. That would have prevented at least one of Monday's fires had that ban not been ignored.
Firefighters say this should serve as a reminder as to why it is so important to follow your local burn restrictions.
Share this article: