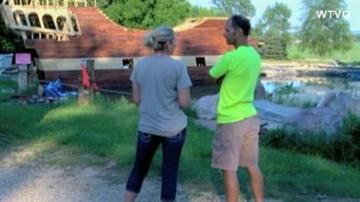 ROCKTON, Illinois -- A groom-to-be is going to extreme measures to get the wedding of his dreams -- aboard a pirate ship! Turns out, there aren't a lot of spare pirate ships around Illinois, so the future husband decided to build his own. But he's run into a little problem with local officials.

When Winnebago County resident Tony Miller proposed to his fiancee Kaela Schenk, he dreamed of them being married on a pirate ship.

What's even more crazy is Tony wanted to build his own ship and pond.

“Maybe a pond. But really a ship? Who builds a ship in their front yard?” said Kaela.

Tony quickly got to work on his labor of love.

“I didn't know anything about ships, but I studied them a lot and it was fun to do. It was a hobby of mine in the winter. I took different types of ships and collaborated my favorite parts of each ship into one. So it's a cross from a Galleon to a Frigate to a Spanish Galleon,” said Tony.

The ship now sits on a man-made pond, surrounded by boulders made by hand. And after months of hard labor erecting this ship, soon it will host family and friends for Tony and Kaela's wedding.

“August 3rd is D-day for the wedding. I believe if we don't have a deadline, nothing gets done,” said Tony.

But with more work still to be done, Tony's plans have hit a snag. The county has put a stop work order on the project.

“I hope it's no big deal. I'm sure we can work something out,” said Tony.

Apparently tony never got the required permit to build the ship, but county officials say they're willing to work with Tony and get him to the ship on time.

The couple is hopeful the project will move forward again soon. But in the meantime, they're enjoying the break and the view from their front yard with big dreams of their special day.

“It's definitely over the top. You definitely don't really picture-- I mean I definitely always wanted an outside wedding, but definitely never pictured being married on a pirate ship,” said Kaela.

“Every morning, I wake up, I just smile because this is just basically one man who did all of this. And if you've ever had a dream come true, I'm living it every single day,” said Tony.