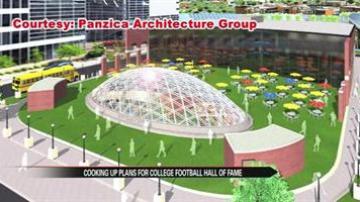 SOUTH BEND, Ind. -- The Culinary Center Coalition wants the city of South Bend to take the former College Football Hall of Fame off the market for six months while they do a feasibility study. They want to turn it into the culinary school for Ivy Tech Community College.

The former College Football Hall of Fame has been vacant since late 2012. Since then, it has been empty.

"It's sitting smack in the middle of town and it's just waiting to be developed and be a bustling community area for the downtown area," said Donna Pfeil, founder of the Culinary Center Coalition.

Pfeil says the Ivy Tech culinary school would be a good fit for the former Hall of Fame building.

"They have a wonderful hospitality and culinary school which is near capacity. And so it was - what do they do? Do they add on? Do they build? What do they do?" said Pfeil.

South Bend residents had mixed opinions about the plan.

"A culinary school is a good idea. It's vacant, put it to use," said John Diales.

Pfeil has drawings from the Panzica Architecture Group of what the former Hall of Fame would look like if the culinary school took over the building.

The city's redevelopment commission will vote Thursday on whether or not they will take the building off the market for six months.

"They will be voting on whether or not to accept our proposal which includes 6 months of due diligence for us to see if we can put this together and Ivy Tech will be doing a feasibility study as well to make sure that this will work," said Pfeil.