In July, the five people were arrested after search warrants were served at four locations. The searches turned up thousands of dollars in cash, several guns, and a plethora of drugs, according to court documents.

Almost all local cases have been dropped as the federal courts will take over. One of the alleged dealers, 24-year-old Kenshon Wright still faces a local charge of dealing narcotics.

Federal charging documents allege on April 12, investigators were called to an address in the 900 block of West Indiana Street for a suspected drug overdose death.

A surviving user from the scene told police that heroin was supplied to them by a group of people.

Police found that the group used a set of shared phones to distribute heroin and Fentanyl.

The informant met McFerren and Wright at the corner of Johnson and Elwood Streets where $70 was exchanged for a plastic bag containing approximately .6 grams of heroin on April 30.

Howard allegedly sold the informant heroin for $70 On July 9.

On July 10, another meeting was set up with Herron and Groves at Chicago and Ford Streets. The two showed up in a black Kia where the informant got into the vehicle and gave $140 to Groves in exchange for one gram of Fentanyl.

A child was in the vehicle during the transaction, according to federal charging documents.

A search warrant was obtained for a home on July 13 in the 300 block of South Illinois Street where Groves, Herron, two other adults and four juveniles were present.

Investigators say they found $32,000 in cash in the home along with three guns, 110 grams of Fentanyl, 28 grams of cocaine, 23 grams of meth, marijuana, packaging material, scales, and cell phones. 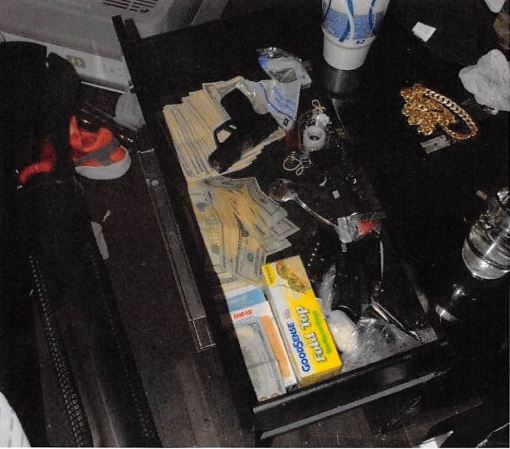 Police say they found this drawer full of guns, money, and drugs inside the home of Groves and Herron. (Photo courtesy United States District Court)

Groves allegedly told police she lived at the home and would deliver drugs when others in the group were busy.

She also told investigators that she lived with Herron for approximately one year.

According to Groves, she would have never been involved in the trafficking if she was not in a relationship with Herron.

In an interview with investigators, Herron allegedly denied any knowledge of trafficking and denied living with Groves on Illinois Street.

On the same day, officials also searched a home on the 2000 block of Lincoln Way West where three more guns, 1.5 grams of heroin, $239 in cash were found, according to police.

Wright allegedly told investigators he had been staying at the address on Lincoln Way West for around two months. He said he knew about the guns in the home, but they didn’t belong to him.

When Wright denied any involvement in the trafficking, detectives showed him a picture of the transaction made with the informant. He then admitted to being there.

During this time, police learned Howard had an active warrant for his arrest. SWAT officers knocked on the door to his home on North Illinois Street where officers smelled marijuana coming from inside the home.

Howard was arrested without incident.

In plain view were two bags of marijuana, large amount of currency, and a cellphone. A search warrant was obtained and uncovered a handgun, 11 grams of marijuana, three cellphones, and $953 in cash.

Howard allegedly admitted to possessing the gun and the marijuana.

These are the new federal charges filed against the five suspects: