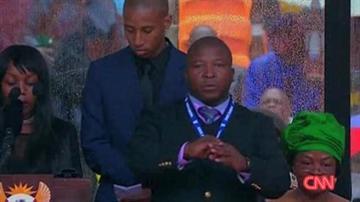 Many in the deaf community are outraged about the sign language interpreter at Nelson Mandela's memorial service. Others wonder if he could have been a security threat for world leaders at the event.

The Deaf Federation of South Africa says the sign language interpreter was a fake.

They claim he's had no formal training, the signs he made are not used in South African sign-language and he never used facial expressions, a key part of signing.

The Federation says there are established signs for famous people in South Africa:

The deaf community in South Africa is outraged.

A deaf member of South Africa's Parliament Tweeted during the ceremony: "He's just making up. Get him out of TV sight."

That lawmaker graduated from Gallaudet University in Washington, the world's only liberal-arts college for the hard-of-hearing.

"You see the repetitive movements here- and here, there's a repeated gesture, but the speaker is not repeating the spoken message. So you can see just by that that the interpretation is not accurate or equivalent," said Metzger.

If this man was a fake, was he a security risk? He stood inches from President Obama and other world leaders.

The White House seemed uncomfortable talking about it.

"I'd refer you to the South African government about who that person was and what their responsibilities were," said Josh Earnest, Deputy White House Press Secretary.

Who is he? It's a mystery. The South African government won't comment, saying it's investigating.

That interpreter, Thamsanqa Jantjie, spoke out Thursday and said he is a qualified interpreter who has been trusted in the past with other big events.