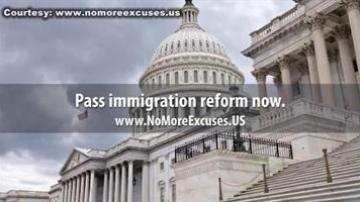 SOUTH BEND, Ind. -- A coalition called Bibles, Badges and Business is trying to raise awareness about immigration reform. They're using the jumbotron at the Indy 500 racetrack to air a 20-second ad 150 times over the weekend.

"Obviously it's a premiere sporting event, we have hundreds of thousands of viewers," said Danielle Burr, Principal of Navigators Global.

During the Indy 500, a 20 second ad asking for immigration reform will air.

"We urge congress to pass reform that both respects the human dignity we care about, and strengthens our rule of law, and protects family unity, but also secures our national borders," said South Bend Police Chief Ron Teachman.

The 20 second ad will air nearly 150 times at the racetrack throughout the weekend.

The ad calls for voters as well as Congress to find a common ground regarding immigration.

They want something that will respect both the nation's borders as well as the families that are already here.

"Both my parents came over, my mom crossed over in her early teens," said Jesusa Rivera, Chair of National Civil Right of Immigrants.

She says the majority of immigrants aren't looking to start trouble-they're only looking to have a better life.

"It's the families that we're concerned about because we don't want to separate any more families than we have to," said Rivera.

She says-the ad will bring more awareness to issues congress will bring to the floor.

"It's really important that everyone get engaged in this conversation because we have waited too long to get this done," said Rivera.

Republican Speaker of the House John Boehner has yet to call for a vote on a limited immigration reform bill, but discussions are going on this week.