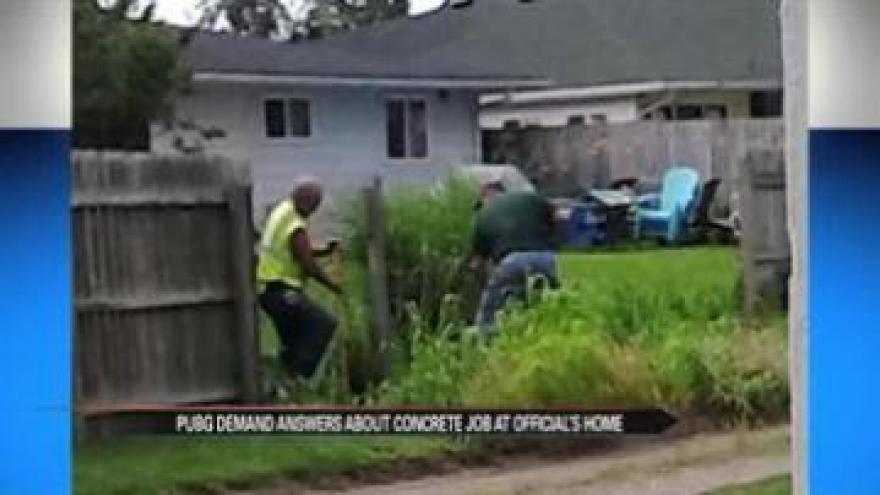 SOUTH BEND, Ind. -- The watchdog group People United for a Better Government held a press conference Thursday asking for the resignation of a city employee accused of using city crews to perform work on her private property. The employee denies the allegations.

People United for a Better Government wants answers from the Mayor's Chief of Staff Kathryn Roos.

"These people waited in excess of a couple years prior to Kathryn Roos getting her work done, their work wasn't done but the work was done for Kathryn Roos," said Mario Sims of People United for a Better Government.

A nearby resident took pictures of what the resident believes is city employees working on private property owned by Roos. The photos were taken at the end of July.

"Someone's private property - back yard. Especially someone with a position such as the chief of staff, that is outright a crime. It's illegal. It's corruption and she should resign from her job," said Jesse Davis, who took the photos to the Common Council.

Davis says the neighbor who took the photographs insists the city workers were at the home completing concrete work on the back patio, but none of the pictures provided show concrete actually being poured.

"As a citizen's watchdog group, we believe that there is Chicago style corruption that exists in South Bend, that is a cancer to the city, and apparently the city administration is unwilling to address," said Sims.

That's why PUBG says they're writing a letter to the Justice Department in hopes that then the city will be more transparent.

"This is not isolated incidents and they always come up with these responses that are not responses. They're just nonsense. We have pictures showing city trucks-- she's saying she's not aware of it-- well someone is aware of it-- and that's why the justice department needs to be involved," said Sims.

I hired a private company to complete improvements at my home. At no time did I ask or instruct a city employee to do work on my property. I believe the thorough, unbiased investigation by the City's Legal Department will soon prove this to be the case.

I have worked with Kathryn Roos for over two years, and find her to be a person of great personal and professional integrity. I am confident she has not committed any wrongdoing. Kathryn remains, as she always has, committed to serving our City's residents.  I am proud to serve with her as we work together, in conjunction with the entire City team, to move South Bend forward.