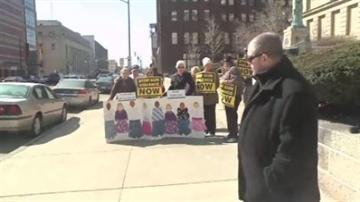 SOUTH BEND, Ind. – Members of the group Mayors Against Illegal Guns organized a rally in front of the St. Joseph County Courthouse to get local residents to sign a petition supporting gun restrictions.

This event was about raising awareness for what President Barack Obama has named common sense gun laws.

For Stephen Miller, the gun control debate is personal.

Miller joined about 20 other activists on the steps of the Saint Joseph County Courthouse to share his tragic story with the public.

“It’s my way of making sense out of what happened in our life and also, hopefully, to curb the gun violence going on and help save other people’s lives also,” said Miller.

The rally was organized to get local residents to sign a national petition against gun violence.

The petition asks congress to pass legislation that would:

For Miller, fighting for reform is a method of coping with his loss.

“There’s never closure to that and I think that’s one thing that people need to understand is that closure is not an option for victims of gun violence,” said Miller.

The group collected 20 signatures and each participant was tasked with collecting 20 more.

Friday morning at 10:30 the group plans to meet at Senator Joe Donnelly’s office to present the petitions.