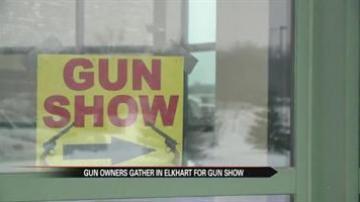 ELKHART, Ind. -- The Elkhart Gun and Knife Show opened in Elkhart just days after two people were gunned down at a Martin’s Supermarket minutes away.

“It may have had a different outcome. We may have not had two dead,” said Edward Becher.

Becher is a gun owner and founder of The Body Guard Academy.

“A lot of people, we do feel safer if we have a gun, because we know if something happens we can defend ourselves," said Becher.

Police were commended for their speedy response - just three minutes - and their ability to take down the gunman, some worry it might not be as fast if there is a next time.

“Truly with the response time being not typically three minutes, it would be comforting to know somebody had a way to stop that guy if I was trapped inside with 12 to 15 people,” said one Martin’s customer.

Becher, who believes in the good of owning a gun, says screening those interested buyers is crucial.

“The vendors that are here at the gun show, they’re not going to sell to anybody,” Becher said.

But some people aren’t convinced more guns will solve the rash of gun violence.

“I just feel like these incidents are happening all over now. And this isn’t an isolated incident. And it is hitting close to home around here. And hopefully that will spur some more talks about gun control and what we can do to keep the guns out of the hands of people that shouldn’t have guns,” said another Martin’s shopper.