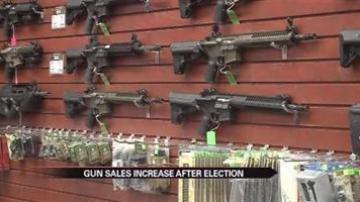 Midwest Gun Exchange was very busy post-election day. Many shoppers said they were just looking to see what is out there while they still can. It is a very real threat and concern for those who believe in the right to bear arms.

A large crowd cheered and celebrated President Barack Obama's re-election. But not everyone was cheering, especially gun owners.

That is because in the second presidential debate last month, Obama said he wanted to get the assault weapons ban re-introduced to help stop gun violence.

It is a fear that is already being seen and heard by employees at Midwest Gun Exchange in Mishawaka.

"Throughout the industry, other dealers are talking about having sales increases because of people mindful and kind of wondering what will happen, if it is going to happen," said Midwest Gun Exchange employee Rocco Rigsby.

In the wake of the election, business is booming for the local gun store and employees said it is the threat of a ban that has sparked the uptick in sales.

"They are fearing things are going to get banned, so they are coming in and taking a look to see what their options are and to see what is available," said Rigsby.

A gun owner himself, Rigsby said a ban will not only affect gun stores, but manufacturers too. He says a ban means it would rid the industry of a heavily-relied on products.

"It limits a category of a sporting rifle that would be gone."

With the potential impact a ban could make, Rigsby and other gun owners said they will be watching closely to see what happens in the future.

Rigsby said a ban is not the answer to limiting gun access to people that should not have them. It is a right gun owners said they will continue to fight for.

"Responsible firearms owners should have the ability to own what they choose," said Rigsby.

There's a common misconception among those unfamiliar with the ban as it was first introduced.

It does not actually remove guns from store shelves, it simply means high-capacity magazines and certain features on particular guns would be banned.