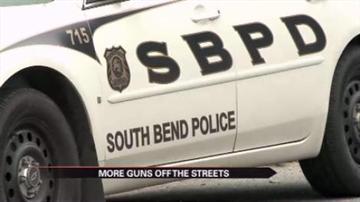 SOUTH BEND, Ind. -- This year the South Bend Police Department has pulled a larger number of guns off the streets than in years past. But the number of guns seized doesn't reveal how many are out there and how much of an impact it has had. Some say it's not doing anything to curb violence.

Recent shootings in South Bend, remind us that gun violence is a reality we live with every day.

Some live a little closer to it than others.

Some living nearby were shocked, others were not.

"They can get guns anywhere; that's the problem," said James Gary.

"You got to know the right people, and you can get what you really want; anything," said Kevin Martin.

The police department says they are doing the best they can to keep the guns off the streets and are unwilling to take more aggressive steps.

"We see other jurisdictions like New York City getting into a lot of controversy right now over just a pat down policy. Effective, yes; but necessarily a second amendment violation, that also could be," said Captain Phil Trent of the South Bend Police Department.

With their hands tied, they and the community are left looking to other means of getting young men to give up the guns.

But that's something few are willing to do.

"They feel a little safer if they riding around with a gun because, you never know, it could be you, it could not. Some people don't want to take that chance," said Martin.

Some think those that are trying to solve the gun violence problem in South Bend are just wasting their time.

Between January 1st and August 1st of 2012, the police department recovered 117 guns.