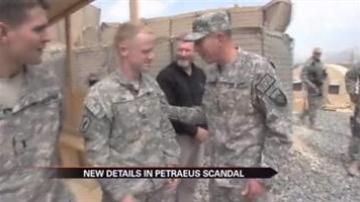 New details have been released about the disgraced former CIA agent David Petraeus and his affair.

A couple months ago an unidentified woman who knew Petraeus and works with the military told the FBI she received a "strange and harassing" email. The FBI launched an investigation and traced the email back to Paula Broadwell's computer.

Many are shocked by the affair because Petraeus himself had been critical of officers guilty of infidelity.

"He spoke of them in just this tone of contempt that they had engaged in this kind of dishonorable behavior which is why I just never thought that he would be up for that sort of thing," said Fred Kaplan.

Some say there were rumors of the affair going on for months.