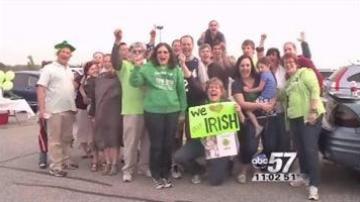 SOUTH BEND, Ind. --  Two of our reporters were in Denver Colorado for the NCAA Women’s Basketball Championship, but not everyone could make the drive.  That did not stop hardcore Irish fans from cheering on Notre Dame together.  Over a thousand of them attended Notre Dame’s Watch Party at Purcell Pavillion.

“They tried to knock us out of here, because you are only supposed to tailgate football”, said fan Lucy Jones.

One of those tailgaters was 32-year-alumni Lucy Jones.

“Since we moved back here, I have been a season ticket holder for 11 years now.  I love going to the games and I love the girls, said fan Lucy Jones.

She says she loves watching the girls play, because they play as a team.

“That is why I like women’s basketball so much better than men’s”, said Jones.

But she admits, beating Baylor won’t be an easy feat.

“I think Odyssey Sims has a whole lot more talent that people tend to overlook when they are talking about Baylor”, said Jones.

I asked Jones what her prediction for the game was and she said she doesn’t have a prediction, but more of a prayer.

“I have a prayer for a victory for the Irish is what I have”, said Jones.

Victory or not she says she will never stop loving the Irish.

“That is why I wanted to come to Purcell pavilion.  We wanted to be with people who have supported the team all year..win or lose…we want to show we have support for them all the way”, said Jones.