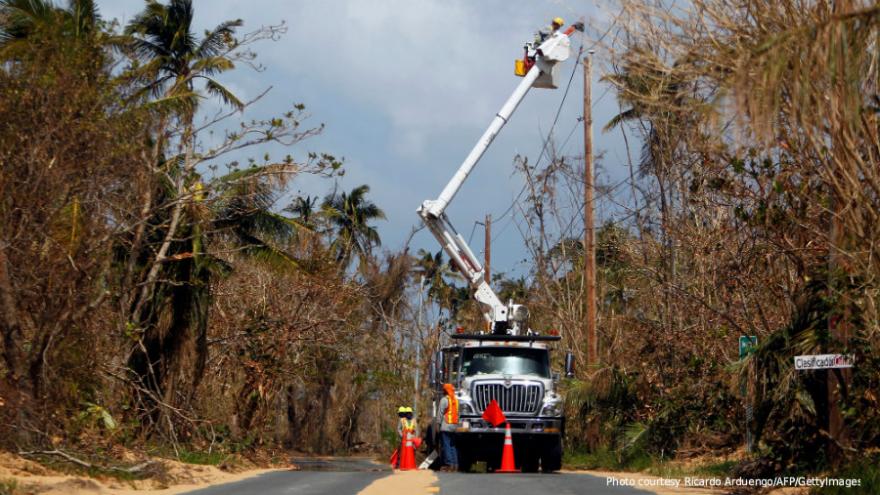 (CNN) -- The embattled head of Puerto Rico's power authority stepped down Friday, nearly two months after Hurricane Maria left much of the island without electricity.

Ricardo Ramos, executive director of the Puerto Rico Electric Power Authority, known as PREPA, submitted his resignation to the bankrupt utility's board. It was effective immediately, according to PREPA.

He stepped down days after the island's governor declared that power generation had reached 50% capacity, only to see an outage leave parts of San Juan without power for hours. It was the second outage in as many weeks.

PREPA's statement did not say why the man who took over the utility last year was resigning.

Ramos, in a brief video posted on the utility's Twitter account late Friday afternoon, was vague on the reason for his resignation. He said it was a personal decision unrelated to recent media coverage. PREPA, he added, remains on track to fully restoring power.

Gov. Ricardo Rosselló posted articles on Twitter about an event he attended on Friday after which he told reporters that Ramos had become a "distraction" and his tenure "unsustainable."

In a statement on Twitter, Rosselló did not give a reason for Ramos' departure. He said he was recommending the appointment of engineer Justo Gonzalez as interim director in order to begin the search for Ramos' replacement.

'PREPA problem is bigger than Ramos'

San Juan Mayor Carmen Yulín Cruz, a frequent critic of recovery efforts, said on Twitter: "That Ricardo Ramos does not head PREPA is the right thing. That he helped destroy the credibility of the PR government is a disgrace."

Dr. Domingo Marqués, a clinical psychologist whose San Juan home has been without power since the storm, welcomed the resignation as "the dignified thing to do" but said it brought "even more uncertainly" to the lives of Puerto Ricans.

"The PREPA problem is bigger than Ramos, and there is little to no clear strategy to manage the problem," he told CNN.

"It still feels like every time we have answers, they change the questions."

"He came into a situation which was almost impossible for any one person to deal successfully with, and then the hurricane made it all the worse."

Unclear how many homes have power

Rosselló has promised that 95% of the island will have power by mid December.

On Friday, some 58 days after the storm, power generation was 44.7% of capacity, according to PREPA. The governor had said he expected to reach 80% by the end of November.

But it's unclear how many homes and businesses that power is reaching. And it's uncertain how many of the US territory's roughly 3.4 million citizens remain without power as they struggle through Maria's aftermath.

PREPA faced widespread criticism for signing a $300 million contract to restore power with Whitefish Energy, a small Montana-based firm with only two employees at the time of the contract.

Attorneys for the PREPA advised the utility to make critical changes to the contract it was negotiating with Whitefish to ensure it was compliant with the Federal Emergency Management Agency's provisions, according to documents released by the House Committee on Natural Resources late Monday.

But the warnings went unheeded and PREPA pressed ahead with the October deal -- disregarding lawyers' recommendations, including terms for canceling the contract, ceiling prices and breach of contract.

"I chose to contract with Whitefish because my priority was securing the immediate assistance that we needed to begin restoring power as quickly as possible to our most critical customers," Ramos said in prepared testimony this week at a Senate hearing.

The island's emergency management director resigned one week ago as Puerto Rico slowly recovers from the devastating hurricane.

In announcing the resignation of Abner Gómez, Rosselló praised the work of his emergency management chief following Hurricanes Irma and Maria, which both hit in September.

The emergency management director came under fire after the island's El Nuevo Dia newspaper reported he took a two-week vacation shortly after Maria made landfall on September 20.