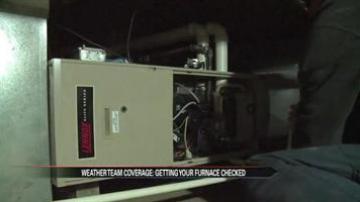 SOUTH BEND, Ind. --With freezing temperatures overnight, heat technicians have been swamped with people calling in needing their furnaces fixed.

Over the weekend, Ray Hoffman felt a chill across his home, so he went to check his furnace.

“It was 67 in the house and it was set on 73, so I am thinking it was not working very well,” said Hoffman.

His furnace was broken, so he called Great Lakes Heating and Air Conditioning.

One of their technicians, James Olesen, went down into his crawl space to diagnose and fix the problem.

Luckily for the Hoffmans, Great Lakes was able to get out to fix the problem that same day, however they were not the only people scrambling to keep their homes heated in these frigid temperatures.

Great Lakes calls have doubled in the past week.

“We are busy. Starting last week as soon as the nights start to drop to the low 40s, we are going to get slammed with people turning their furnaces on for the first time of the year and finding they are not working at all or not working properly,” said Olesen.

Olesen says the majority of these calls could have been prevented or at least decreased by simply cleaning and changing the filter regulary.

“On an average about 80 percent of all furnace failures are due to dirt in some way shape or form,” said Olesen.

Hoffman says he signed up to have routine maintenance done on his furnace to avoid one of these pre-winter breaks again.

He is relieved he and his wife can now rest easy in their warm cozy home this winter.