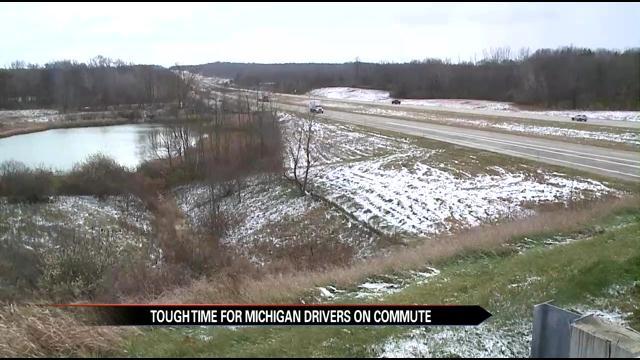 Helen Smith said, "They got blind sided, but they came out and took care of the roads!"

Drivers said crews cleared interstate 94 and US 31 quickly. David Bayse was driving from Traverse City to Indianapolis with his dog. He said he saw numerous slide offs.

David Bayse said, "Since Grand Rapids, I saw 5 cars off the road, a lot of blowing snow, and some surprising ice in spots!"

Bayse said, "Traffic was congested trying to get around trucks and the ice and the rain and the mud and dirt."

State Police said they had a busy morning managing accidents.

The dispatch center received over 4,000 calls before noon.

Sgt. Matt Churchill said, "This morning there were 7 accidents on the bypass and then there were two that were on overpasses related to the bypass."

Police want drivers to slow down as the temperatures drop overnight.