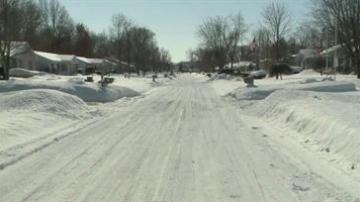 ELKHART, Ind. -- The Utilities Service Manager for the city of Elkhart keeps track of whose pipes are frozen and helps the homeowners find a solution. She has worked with the city for 20 years and says this is the worst winter she's seen.

When Mike Robertson realized he was the only resident on Pomona Street with water on his side of the street, he was happy to help his neighbors.

"Right by the bush on both of our houses all the way up to the house is our responsibility, so Saturday we dug down to the shut-off and disconnected the pipes going to our houses," said Robertson.

Homeowners in the city of Elkhart are responsible for the service lines leading to their homes.

If those service lines freeze, it's not the city's responsibility to thaw it out.

So neighbors are helping neighbors by using a long garden hose as a makeshift pipe.

"The neighbor over here's got water coming from a spigot outside to her house and we just used my hot water heater from the house to thaw out his line," said Robertson.

But you don't have to do this alone. The city will come out and do it free of charge.

All you need is a neighbor with running water and a long garden hose.

Kolo is staying on top of a list of at least 30 homes without running water right now.

That's just the people who have called the public works billing office.

She says the garden hose trick is worth a shot because calling a plumber can get expensive.

"There is no additional cost to this because we'll estimate bills for you and your neighbor that's providing the water," said Kolo.

Robertson says he will give water to his neighbors for the next month at least, until things begin to fall.

He says he's thankful the city is going to average out all the bills so he doesn't pay for everyone.