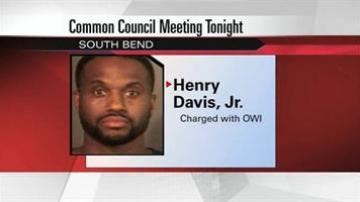 Davis Jr. was arrested July 19 for allegedly driving under the influence after driving the wrong way on the US20 bypass.

Under the advisement of legal counsel, I am unable to make a statement regarding the incident on July 19, 2014.

Further, I am temporarily taking a medical leave of absence from my duties to concentrate on my health.

I appreciate your support and patience. Thank you.