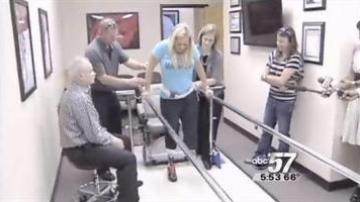 At least 13 people were killed in Clark County and the town of Henryville was "flattened." A mother trying to ride out the storm was severely hurt.

She lost both her legs after shielding her children from the basement ceiling that caved in, but now a major milestone has happened.

Stephanie Decker is able to stand up on her own. She’s wearing one of her new prosthetic legs. She said she is optimistic she will walk again, but if not, no big deal.

“I want to get up and walk, but if for some reason I didn't, then life still goes on,” said Decker. “I still have kids to take care of, a family that I love. We would still make it work and we would be happy and it would be okay.”

Decker is being fitted also for her left leg, but it will be a few weeks more because that leg needs a little longer to heal.