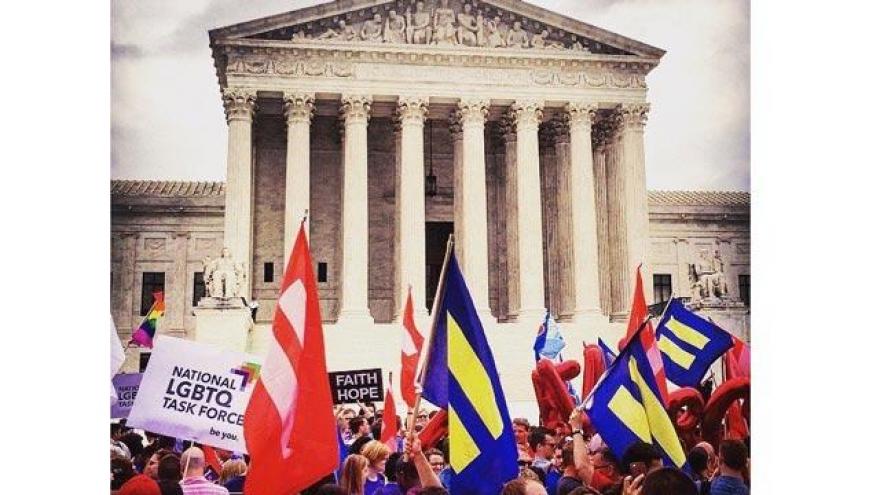 
(CNN) -- Friday's U.S. Supreme Court decision requiring states to allow same-sex marriage unleashed an outpouring of reaction across the nation, both in favor of and against the landmark ruling.

Outside the Supreme Court in Washington, hundreds gathered outside, waving U.S. and rainbow-colored flags, chanting, "U.S.A.! U.S.A.!" and celebrating the decision with selfies at a historic, if divisive, moment in the nation's history.

"We can do it now!" one man said, hugging another man and kissing him on the cheek. "It's great, man."

In Atlanta, Bob Burkhead, a resident of Louisville, Kentucky, said supports the decision.

"I think it's great," he said. "Finally. They had to go all the way to the Supreme Court to get it done, but they did it."

"I think everybody should be able to love who they want," another man, Jarrod Lewis, told CNN.

In St. Louis, Friday marked the opening day of the annual PrideFest, a celebration of lesbian, gay, bisexual and transgender culture.

Pride in St. Louis this weekend is going to be extra rowdy!" one Twitter user posted. "We definitely have something to celebrate!!!

In San Francisco, about a dozen people gathered immediately after the decision's announcement, according to CNN affiliate KGO reporter Vic Lee.

"Guess who can get married when they want to?" Instagram user Marlena Silver wrote. "ME."

Not everyone was pleased, of course.

"Gay marriage is legal now. What a joke," one Twitter user wrote. "This country has turned away from God."

Others just seemed stunned the fight was over, 42 years after Maryland became the first state to pass a statute banning same-sex marriage, according to Freedom to Marry, which backs marriage equality.