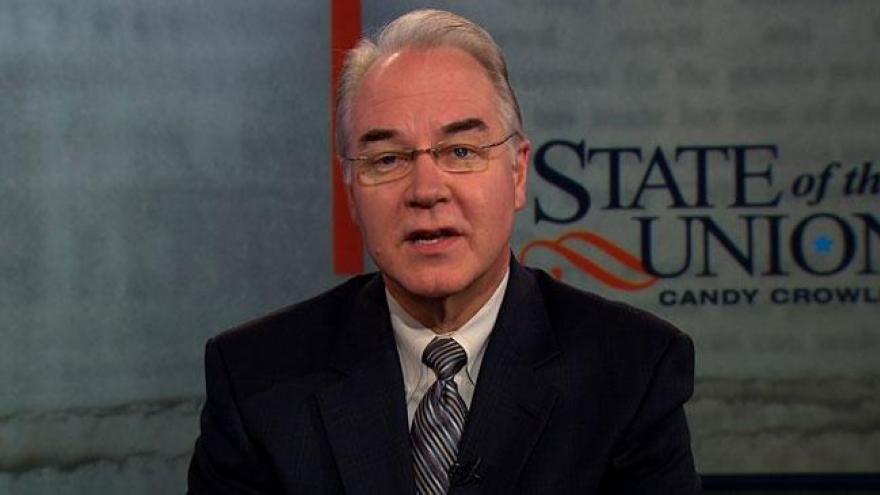 "Everything that we have done has been above-board, transparent, ethical and legal," Price told the Senate Health committee.

These comments came in the middle of an exchange with GOP Sen. Orrin Hatch, who strongly defended his colleague. Hatch called the accusations leveled against Price "nothing more than a hypocritical attack on your good character. And I personally resent it."

Price is in the hot seat Wednesday both over his plan to revise the nation's health care system and his past financial investments.

Right off the bat, Democratic Sen. Patty Murray grilled Tom Price on whether he purchased stocks in a company called Innate Immunotherapeutics after receiving a "stock tip" from a fellow member of the House, GOP Rep. Chris Collins.

"Do you believe it is appropriate for a senior member of Congress, actively involved in policymaking in the health center, to repeatedly personally invest in a drug company that could benefit from those actions?" Murray asked.

"That's not what happened," said Price, who insisted repeatedly that he never received information that could be considered stock tip.

Murray shot back: "I believe it's inappropriate. And we need answers to this."

Price, who will be key in the effort to repeal and replace the Affordable Care Act, said Trump and Republicans must reassure the American people that "Nobody's interested in pulling the rug out from under anybody."

"We believe that it's absolutely imperative that individuals that have healthcare be able to keep health coverage and move hopefully to greater choices and opportunities for them to gain the kind of coverage that they want," Price said.

Price, however, has been kept out of the loop on Trump's Obamacare proposal so that he doesn't have to answer questions about the specifics of that plan.

In his opening statement, Price emphasized his upbringing and professional background, including his 20 years as a practicing physician that he said helped him learn about "not just treating patients but about he broader health care system and where it intersects with government."

But he did not mention his legislation to undo Obamacare, speaking instead in broad strokes about the country's health care system. Price said he believes in these six principles of health care: "Affordability, accessibility, quality, responsiveness, innovation and choices."

Price is under fire for appearing to have invested in healthcare firms while simultaneously working on legislation that would have affected those companies. On Monday, CNN reported that Price invested in a medical device manufacturer only to introduce a bill that would benefit that company days later.

This report prompted Senate Majority Leader Chuck Schumer to warn that Price may have violated the law and call for an investigation.

Democrats on the committee intend to make Price's potential ethics issues a major focus of Wednesday's hearing, according to a Democratic source.

Both Trump and GOP leaders on the Hill have been emphatic that undoing Obamacare is their top legislative priority.

While Republicans have moved quickly to start the process of rolling back big parts of the law, there is still no consensus on an alternative to the Affordable Care Act and how quickly the party will be able to craft a proposal.

But there is growing consensus that repeal and replace must happen more or less simultaneously if Republicans want to try to avoid a political fallout from widespread disruptions in people's health care coverage.

"Obamacare should be finally repealed only when there are concrete, practical reforms in place that give Americans access to truly affordable health care," Alexander, the chairman of the Health Committee, said in his opening remarks.

Trump also told The Washington Post over the weekend that his own plan to repeal and replace Obamacare was almost finished, and that it would provide "insurance for everybody" that is "much less expensive."

"There was a philosophy in some circles that if you can't pay for it, you don't get it. That's not going to happen with us," Trump said.

Murray, the top Democrat on the committee, pit Trump's own words against Price's health care record.

"Just days ago, President-elect Trump promised 'insurance for everybody,'" Murray said at the top of the hearing. "But Congressman Price, your own proposals would cause millions of people to lose coverage, force many to pay more for their care, and leave people with pre-existing conditions vulnerable to insurance companies rejecting them or charging them more."

This will be the first of two hearings for Price. He will also face the Senate Finance Committee on January 24.