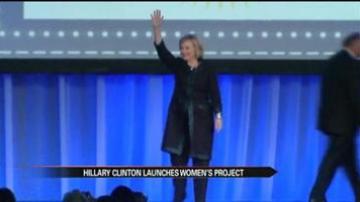 Here in the United States less than 20 percent of corporate board seats are made up of women and only 4 percent of Fortune 500 CEOs are female.

Nearly 40 percent of American women are primary breadwinners for their families but many cannot move upward in their careers because of the "glass ceiling."

"I believe that women everywhere can be and are agents of change, drivers of progress, makers of peace, all we need is a fighting chance to show what we can do in every part of life," said Clinton.

The project could also serve as a recurring campaign theme should Clinton decide to run on the Democratic ticket in 2016.