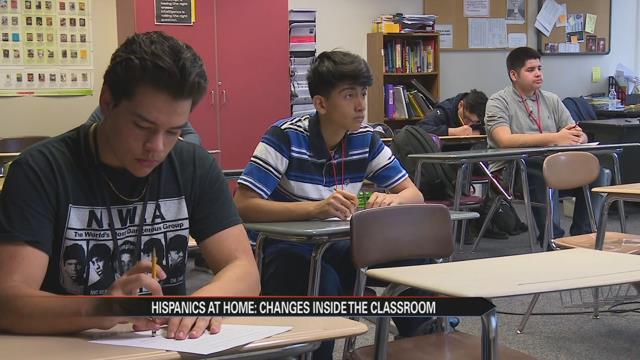 Latinos are now the majority in one Elkhart County School System.

Over the past years administrators have made changes to make sure the changing demographic succeeds.

In Goshen Community Schools about 52% of the students are Latino with about 10% of that group being born outside of the United States.

Chiquito is from Aguascalientes, Mexico and has been in Elkhart County since he was three.

He says as a student he has experienced firsthand the challenges of language and culture in a new place.

Chiquito is 17 years-old and has been in Goshen schools since third grade.

This year he is graduating from high school with an acceptance letter to Goshen College.

The confidence the teen presents wasn’t always so strong.

“In first grade I remember I was about to flunk the year just because I didn’t know what was going on in the class room,” says Chiquito.

Jose first attended Jefferson Township schools back in 2001 when there wasn’t much help with Spanish to English translations.

“Everything was just a blur because I couldn’t make those relationships with other students because of the difficulty of communicating,” says Chiquito.

In 2006 Jose transferred to Goshen Community Schools around the same time Tom Good started working as an English learning teacher.

“Since I’ve been here we’ve known that the families and that their support is key to their [the students] education,” says Tom Good, English Learning Director for Goshen Community Schools.

Good says since he started teaching in Goshen the population of Latino students has always been over 15%.

“Goshen is interesting because it is almost like a microcosm of the national picture,” says Good.

Today 40% of Latino students in Goshen schools receive English learning services but those students come in with various language levels, ranging from the basic greetings to reading a chemistry book.

“And then they just grow in their ability to participate they branch out in their relationships and their friendships they start to take more and take more difficult classes they want to meet the challenges,” says Good.

Chiquito says it wasn’t until the beginning of high school that he started taking on leadership roles.

Most recently he led Latinos and Spanish speakers to become politically active and vote in local elections.

Chiquito says his education in Goshen has been supportive but he adds that the schools need some work on cultural sensitivity.

“It’s just something that we didn’t really consider it before we didn’t think of,” says Chiquito.

At each school there is at least one parent liaison who speaks Spanish to communicate with parents.

Good says two of his former English language students are back at the high school as teachers.