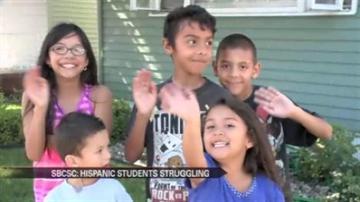 SOUTH BEND, Ind.-- The South Bend School District is trying to decrease the drop-out rate across the district and on Monday, the board approved a new position called the African American Student Services Department. It's designed to help only the black students, leaving many in the Hispanic community baffled.

Now Hispanic parents and students are wondering if a similar department will be created for them since almost 15 percent of Hispanics in the district dropout before graduation.

It's something senior Gerardo Uribe's seen many times before.

"Most of them just didn't want school anymore," said Uribe.

It's a problem the entire district faces. The drop-out rate for black students is slightly higher at 20 percent, but those low rates are not exclusive to one race.

Uribe says thankfully he's not part of the statistic. He plans to attend college, but some of his classmates weren't so lucky.

His neighbor is a mother of four and she's finding help elsewhere for her high school freshman.

"There wasn't a lot of help that I was getting from the schools," said Noelia Salazar, mother of four. "There are some counseling but just not enough support."

She's switching her son from Dickinson to Adams, a predominately Hispanic school, for the magnet program. She hopes he'll get more attention.

"I need to make sure that if he's not getting that help, I'm fortunate enough where I can speak English and I can find that help," said Salazar.

In the meantime, she hopes the district meets her half-way.

ABC57 did request to speak with the district's superintendent and have yet to hear back.