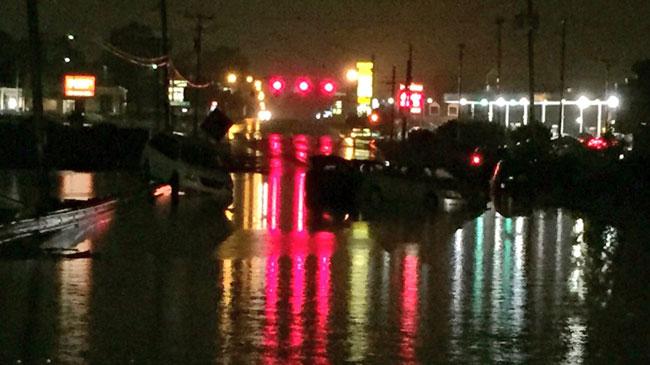 In a press conference at 11 a.m., South Bend Mayor Pete Buttigieg gave the media an update on the storm recovery.

So far there have been no injuries reported. He says he wants it to stay this way, so residents should not drive or walk through flood waters. If there is a barrier in place, but no flooding present, crews are likely working to assess whether the roadway is safe to reopen.

Although the rain has ended, water levels may not necessarily recede in all locations. In some locations, the water may actually rise.

Mayor Buttigieg says two houses have collapsed because of the flooding.

If you have water in your home and the electricity is still on, avoid the flooded areas to minimize your risk.

There have been 13 water rescues. Most have been simple, but there was at least one where they had to put a boat in the water to rescue people from a car that was partially submerged.

The city's south side was particularly hard hit. People had to abandon their cars along Ireland Avenue, where several feet of water overtook the road.

Homes also took on a lot of water overnight. Many spent the night watching their basements fill with water.

"The rains were incredible," said Brady. "It was knee deep in our yard. We had a complete circle of rain around our entire house, coming in our basement, coming in our family room level--unbelievable amounts of rain."

The flooding left a sink hole in front of a home on Fox Street causing the front porch of the home to collapse. Firefighters fear the entire building may also come down.

"We feel it's probably being undermined and going underground to Bowman Creek, and it's constantly eating away at the ground at the base of the house," said Battalion Chief David Maenhout.

No one was inside at the time.

Some residents along Calvert street had to be rescued by emergency crews.

"I was walking around the house looking around to see what happened and the fireman came and I had to evacuate because smelled gas in the house," said Randy Fish. "My wife was still inside so he told me I can stay here he was going to go get my wife, life preserver and the whole works. She has a hard time walking"

One homeowner on Calvert Street was taking in neighbors who were displaced by the flooding.

"I have two sets of neighbors in my house because they were standing out in the rain and the fireman told them they had to higher ground so I couldn't have them stand in the rain," said Amy of South Bend.

Others along Calvert street resorted to a canoe to get to where they needed to go.

"We were canoeing because it was super flooded all over the place and stuff I was like I have a canoe and everything is flooded," said Skylar Chapla.

Many residents at the Indian Lakes Apartment complex in Mishawaka woke up to their buildings surrounded by water. Some people living on the first floor reported water coming from the ceiling into their apartments.

Shelters have been opened up for those displaced by the heavy rain. The O'brien Center (321 E. Walter St) and the Martin Luther King Jr. recreation Center (1522 Linden Ave). South Bend Animal Care and Control also opened early Tuesday morning to take in any pets displaced by the flooding.