Holocaust art exhibit in Elkhart serves as a lesson and reminder 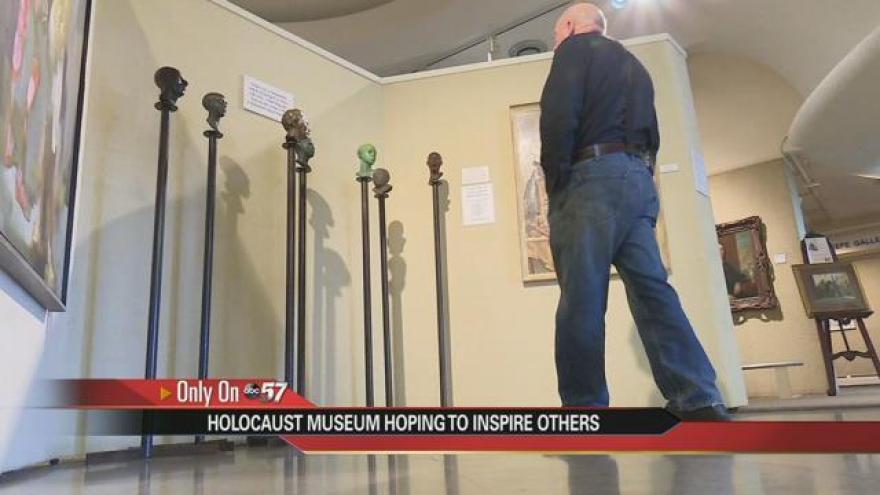 Art has the power to remind and inspire. In Elkhart, the Midwest Museum of American Art is hoping that their Holocaust mini-exhibit, will teach the community lessons of the past .

A Granger man sculpted the centerpiece of this exhibit, after a life-changing trip he took to Germany over 20 years ago.

It was a trip Tuck Langland will never forget: a trip to Dachau, a German concentration camp, a site where thousands were killed during the Holocaust.

"When I got back, I got this idea of witnesses to it. So, I began making these really small heads out in the studio," Langland recalls. "They're just little things."

He explains witnesses could be anyone: victims, guards, townspeople. Anyone who saw what was going on.

"When I came to Dachau, there's just a gigantic wall, and you don't know what's behind that wall," Langland says. "You could easily drive past it."

"We all do these things mostly for ourselves," he adds. "And if other people see it, and are moved by it, and feel feelings for it. That's good. That's wonderful."

Placed at the forefront of the museum, people stopped and stared.

Including ABC57's Hayley Fixler, the granddaughter of Holocaust survivors who went through the concentration camps.  She saw that the small, but important pieces of art, were impactful.

She wasn't the only one.

"It's quite moving. It's unbelievable the inhumanity that man can have towards man," says Larry Christensen.

Christensen has lived in Elkhart since the end of World War II; since 1945.

"Every generation needs to be reminded of it," he adds.

And for Langland, there is no better time for that, than the present.

"Swastikas are appearing in graffiti in this country now. We have forgotten," he says. "There are people that would just as soon do it again. We can't have that."

While art is an important piece of our past, it can still, very much, shape our future.

"If we can't learn from this, what can we learn from?" asks Langland.

The Holocaust mini-exhibit will be joined by the Anne Frank traveling exhibit at the Midwest Museum of American Art on February 17.