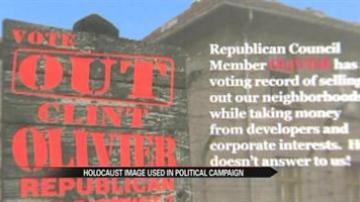 FRESNO, Calif -- A city council candidate in California tried to make a point about urban blight but ended up offending thousands of people in the process.

A message sent from Mike Wells to thousands in Fresno has a picture that the Jewish community recognized. The image was of the Auschwitz concentration camp during WWII.

"This was not something you could find accidentally, so someone who is putting this out knew what they were doing and made a really bad decision," said Rabbi Rick Winer of Temple Beth Israel.

The rabbi says he had a conversation with Wells and that he accepted responsibility for the mistake.