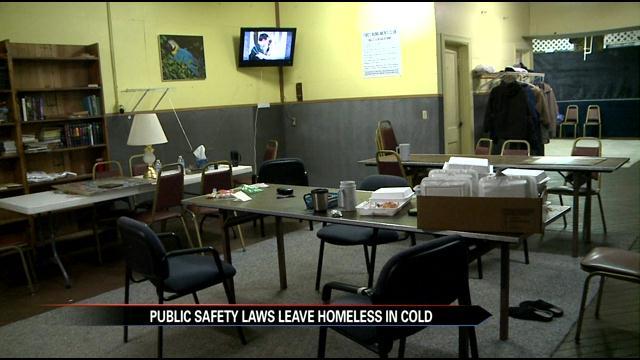 A homeless shelter in Goshen could be shut down because it doesn't meet fire code.

The effort started back in January by a group of local church pastors wanting to help the male homeless community.

They rented a building on East Lincoln Avenue where single homeless men could go and get out of the elements.

The shelter is named the "First Rung Club" because the goal is to help give homeless men a boost to reach the first rung of the ladder and get back on their feet.

Since they started in January, some of the men have already established jobs and are back on their feet.

One of the pastors said one man had to be hospitalized when he was picked up off the streets due to ailments sustained from the extreme cold.

Without this shelter, there is not an available place for homeless men to go in Goshen.

Even with the warm up in the near forecast, the temperatures still drop very low at night making it dangerous for anyone to be living outside.

Goshen Fire Chief Danny Sink said the founders of this program have a great intent but he is worried about the safety of this building.

"Our problem is the safety of the people who are there. It's in an old industrial building, it's not sprinkled, they're housing people 24/7, and it just has to be safe. There's no fire alarm, there's no smoke detectors,” said Sink.

Both the founders of this program as well as the Goshen Fire Department are working to find a compromise so safety codes can be met and these men are kept out of the cold.

“We are currently working with them to find, another facility and/or come up to code standards,” Sink added.