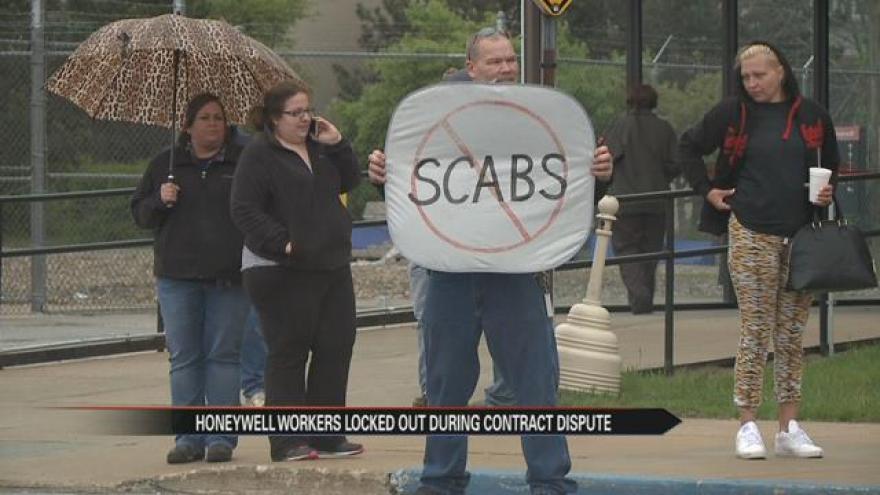 Union employees at Honeywell have been locked out of the building, pending a collective bargaining agreement.

Some workers took to the streets to express frustration.

“This morning at 6 a.m. they decided to lock us out until we reach an agreement. So at 6 a.m. they started going through the plant and escorting everybody out,” said UAW Local 9 President Adam Stevenson.

But Monday morning he and more than 300 union employees were not allowed inside the building.

“The company came in and escorted us out and brought in replacement workers,” Stevenson explained.

So some employees decided to protest outside.

“Instead of giving us a decent contract they want to take stuff away from us, and a lot of stuff,” said a Honeywell employee.

On may 3rd union workers said the company presented its best offer.

But employees are not satisfied with the proposed healthcare coverage.

“The biggest point was healthcare. The healthcare they were looking at was going to be open ended so they could change it year after year without notifying us,” said Stevenson.

Another point of contention is subcontract work.

Employees fear it may result in a loss of jobs at the facility.

Representatives with Honeywell did not want to go on camera but sent a statement to ABC57, saying in part.

“Our commitment to South Bend is 92-years strong. We remain optimistic that we can reach a new collective bargaining agreement that provides wage increases and comprehensive benefits to our employees.”

Union workers are not getting paid today and won’t again until an agreement is reached.

“My hope is we can come to an agreement and everybody can go back to work because nobody wins when we get to an impasse like this,” said Stevenson.